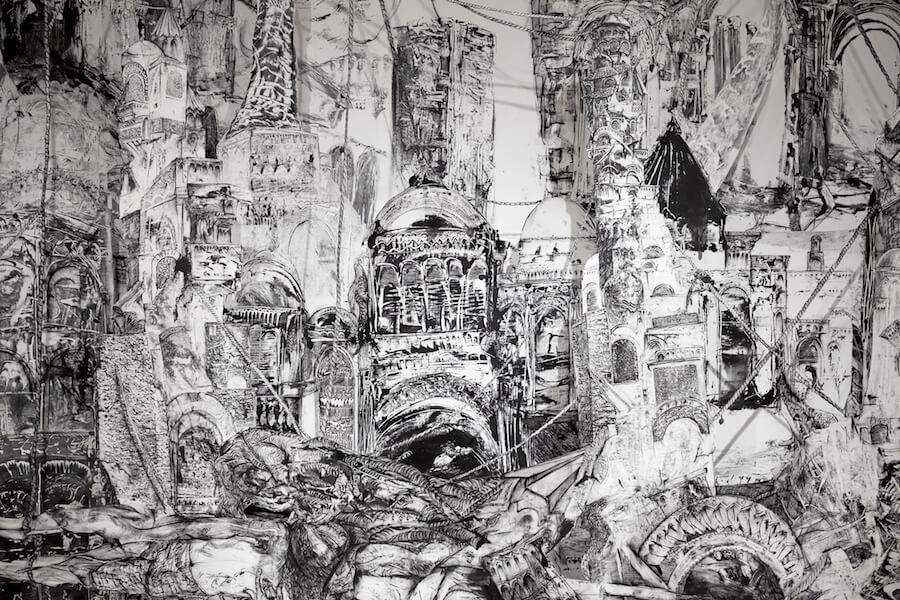 ​The Ismaili Centre in South Kensington has recently re-opened its Zamana Space with a new exhibition by the Syrian-Armenian artist, Kevork Mourad. The show, entitled Seeing Through Babel, comes through a partnership with the Aga Khan Museum, Toronto, which held an exhibition of the artist’s work earlier this year.

Mourad has a long history of live performances, developing a collaboration in which art and music harmonize with one another – including sharing the stage with performers to engage with the public around the world. He moved to Armenia, where his family originated from, to study fine art at the Yerevan Institute in the early nineties, then, in 2001 he moved to the USA and where he is currently based in New York. In his art projects, which include drawings, installations, animation and video art, he recreates urban landscapes lost in time, that no longer exist, some destroyed centuries ago and some recently devastated, like in his work ‘Immortal City’ inspired the ancient city of Palmyra, Bosra and Aleppo.

Between 21 – 30 June Mourad used the Ismaili Centre’s Zamana Space as a ‘studio’ and welcomed visitors to witness the creation of his exhibition, the heart of which is a 6 metre installation inspired by the Tower of Babel. The story from the Old Testament saw mankind punished for attempting to build a tower to heaven, resulting in God creating multiple languages to stop it happening again. A brutal punishment for an act of hubris, but also, for Mourad, a blessing: the origin of the diverse languages and cultures that enrich our world. 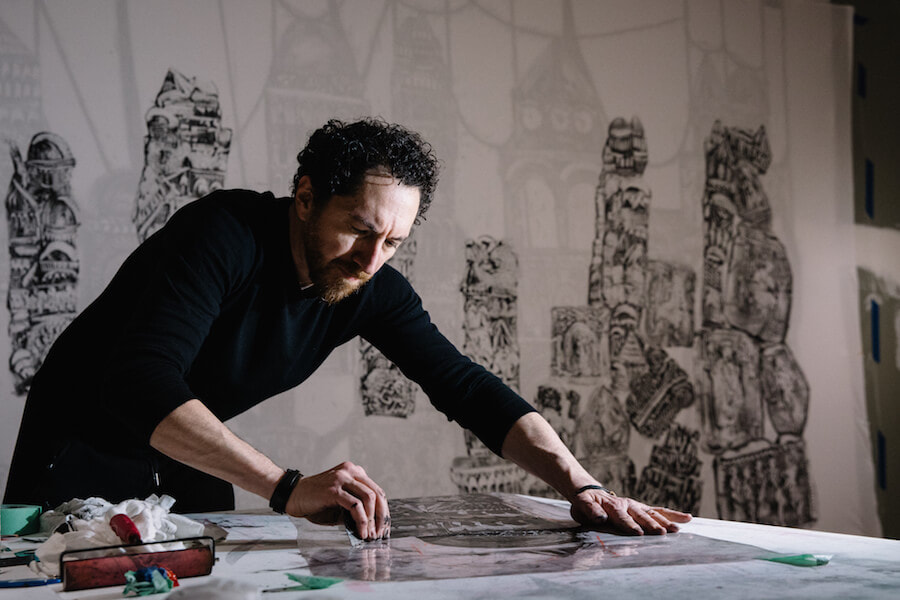 Kevork Mourad. Photo @ Connie Tsang
Approaching the Centre, the viewer is greeted by an elaborate installation featuring Mourad’s signature cut outs, a tree surrounded by fragments of early writing, symbols and architectural shapes – the tree almost growing out of the writing. To understand and appreciate every detail it is necessary to enter and walk down the gallery stairs, where the writing you encounter at the window is now embedded within the tower itself. Here visitors can explore, walk around and peak through the arches and windows composing the imaginary city of Babel, which are cut out and enhance the 3-dimentional quality of the installation.

The multi-layered installation - of hanging fabric, suspended from the ceiling of the gallery in concentric overlapping cylinders- is inspired by traditional iconography of the tower of Babel, as depicted by Peter Bruegel the Elder, but every element that compose the complex urban environment is drawn by memory and is improvised, instead of being meticulously planned. The artist impressed images of architecture, calligraphy and human bodies onto the large cotton sheets, using monotypes and ink drawing. Monotypes are a peculiar printing process, a signature technique for the artist, it doesn’t need particular tools, only expertise and is used to achieve the result of a rough texture, the one of ancient artefacts. 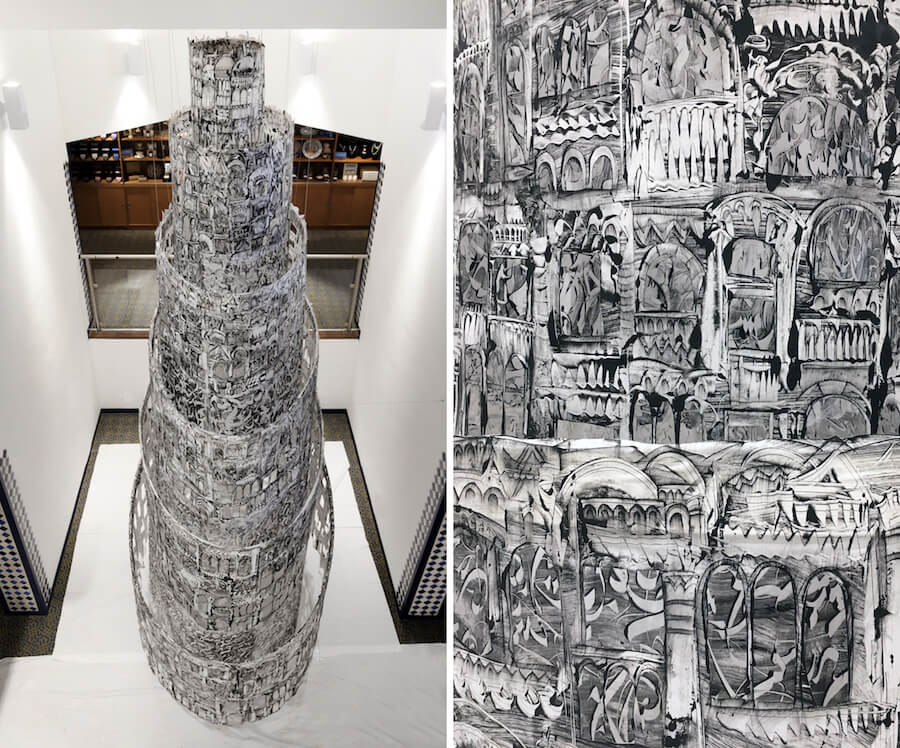 Image on the left: Seeing Through Babel, 2019 installation at the Ismaili Centre, London. Photo by © Anne Purkiss
Image on the right: Detail from Seeing Through Babel, 2019 installation at the Ismaili Centre, London
The collateral production of the printing process is also on display, giving insight into Mourad’s process: fragments of the composition that are pressed onto the fabric of the tower, later completed with ink drawing, made with a specific tool invented by the artist.
​
Kevork Mourad creates his work with fluid movements, each single mark is meaningful and there are no ‘errors’. Every line finds its place in the composition as the process become meditation. This creative flow includes the public and their suggestions; they are not only witnesses, but they actively take part in the discussion around the themes featured in the exhibition with a tangible result.

Walking around the installation it is possible to follow the intertwining lines, combining elements from traditional Islamic architecture and calligraphy. Between the arches, the concentric patterns and the written word, human figures inhabit the space and complete the scenography. It is a place, an imaginary space, to meditate on the coexistence of communities speaking different languages and with different heritages, traditions, religions, one recurrent theme in Mourad’s work, and his work resonates with memories from his childhood in the multicultural city of Aleppo and the desire to reconnect with the past - echoed by the title of his most recent projects: ‘Memories of Stone’, ‘Time Immemorial’, ‘Immortal City’.​

Kevork Mourad. Photo © Ed Tadevossian
He masterfully merges personal and family history with present political scenarios. Using a biblical episode such as the Tower of Babel is a means to dive into collective memory and use a familiar iconography, plus an art made of gesture and live performance as a bridge to overcome the boundaries of different languages.

Throughout the exhibition, he grasps a sensitive and delicate subject matter and depicts it in a lyrical way without cynicism or brutality. The canvas unfolds a story able to testify the horrors of society but also the resilience, adaptivity and beauty of human beings.
Text by Giulia Segreto

Through painting and performance, Kevork Mourad explores the gravity of place-loss, the nature of time, and the collective memory that binds us together as humans. Out of Mourad’s lines, impressions and strokes – a repertoire of markings that has been mastered over years of daily practice – emerges a panorama from the historical Unconscious, a scenography that is directly connected to his Armenian and Syrian heritage. His brushstrokes act as a helix, tethering the present and the past, tracing the contours of history through architectural, artifactual, calligraphic and human forms. Open and generous with his process, he collaborates as a matter of instinct, building micro-communities during the creation or co-production of a painting, live drawing, or performance.

Mourad employs his technique of live drawing and animation in concert with musicians – developing a collaboration in which art and music harmonize with one another. Collaborators include Yo-Yo Ma, Kim Kashkashian, the Los Angeles Master Chorale, Brooklyn Rider, The Knights, Perspectives Ensemble, Paola Prestini, and Kinan Azmeh and he has performed in many institutions, including The Aga Khan Museum (Toronto), The Art Institute of Chicago, The American Museum of Natural History, The Brooklyn Museum of Art, The Bronx Museum of Art, Carnegie Hall, ElbPhilharmonie (Germany), Rhode Island School of Design, Nara Museum (Japan), Lincoln Center Atrium, the Metropolitan Museum of Art and The Walk Disney Concert Hall.

Born in Qamishli, Syria, Mourad now lives and works in New York City. He received his Master of Fine Arts from the Yerevan Institute of Fine Arts in Armenia. Mourad has been a resident teaching artist at Brandeis University, Harvard University, and Holy Cross (Worcester). He is the only visual artist member in Yo-Yo Ma’s Silk Road Ensemble and is featured in the film “Music of Strangers” (2016).
​
Recent commissions include Israel in Egypt, for the Los Angeles Master Chorale,Sound of Stone to accompany the exhibition “Armenia!” for the Metropolitan Museum of Art and Well Wish Ya, a dance performance piece with the OYO Dance Troupe in Namibia. His performance, Home Within, co-produced with clarinetist Kinan Azmeh, has toured the world. The 2016 recipient of the Robert Bosch Stiftung Film Prize, his animated film 4 Acts for Syria made its 2019 premiere at the Stuttgart Animation Festival.