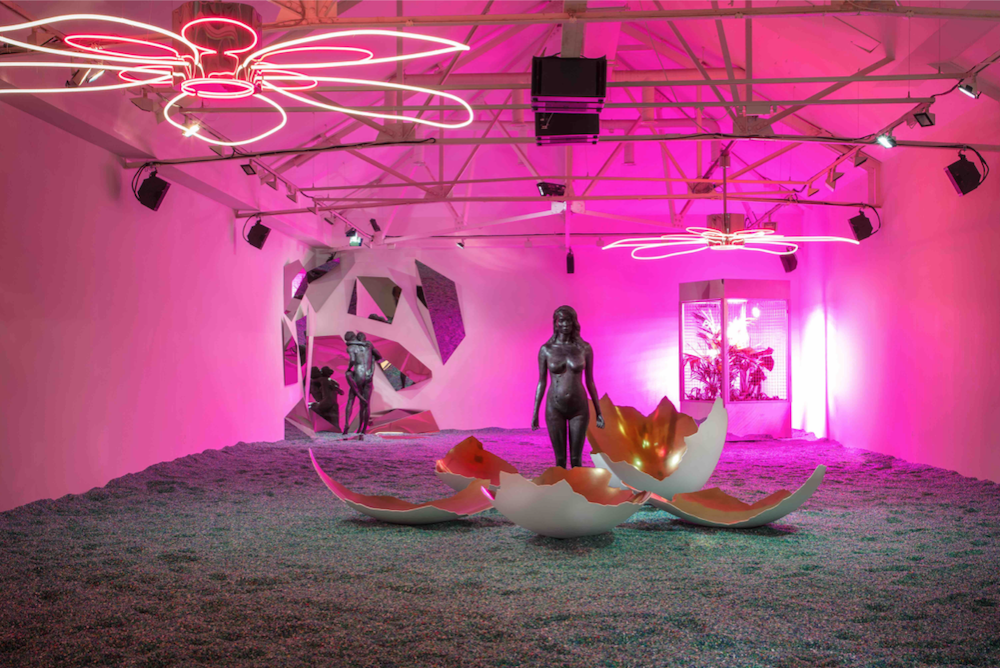 Cyril de Commarque’s practice stands at the intersection of art, science and activism. As part of Saatchi’s special artist-in-residence programme, he has created an ambitious and powerful multimedia installation entitled Artificialis, now on exhibition at the Saatchi Gallery.

Commarque is no stranger to innovative creations: his landmark work Fluxland launched in London to great acclaim back in 2016. Three years in the making, that work saw Commarque convert a 1950s Dutch grain barge into a 25-metre-long, interactive artwork, sound piece and space for debate. The artist’s latest project, which invites us to contemplate notions of legacy and transition, is the result of a special commission by Saatchi – for its Artist-In-Residency programme – with a brief to respond to the exhibition Tutankhamun: Treasures of the Golden Pharaoh, which will also be displayed at the gallery until May 2020.


Taking as its starting point the Anthropocene era ­– the period when man first had an impact on Earth’s geology and ecosystems – Artificialis proceeds to look towards the future, meditating on the effect technology and scientific advancement will have on humankind and the environment. Commarque invites us to contemplate this new world, starting with the notion that Homo Sapiens will be superceded by a species of its own creation, Homo Artificialis. Rather than portray this projection in utopian or dystopian terms, Commarque interrogates his own feelings through a series of sculptural mise-en-scènes, each piece documenting the transition from one age to another, all of which sit on top of a mesmerising ‘field of colours’ created with millions of recycled plastic flakes that spans the floor. 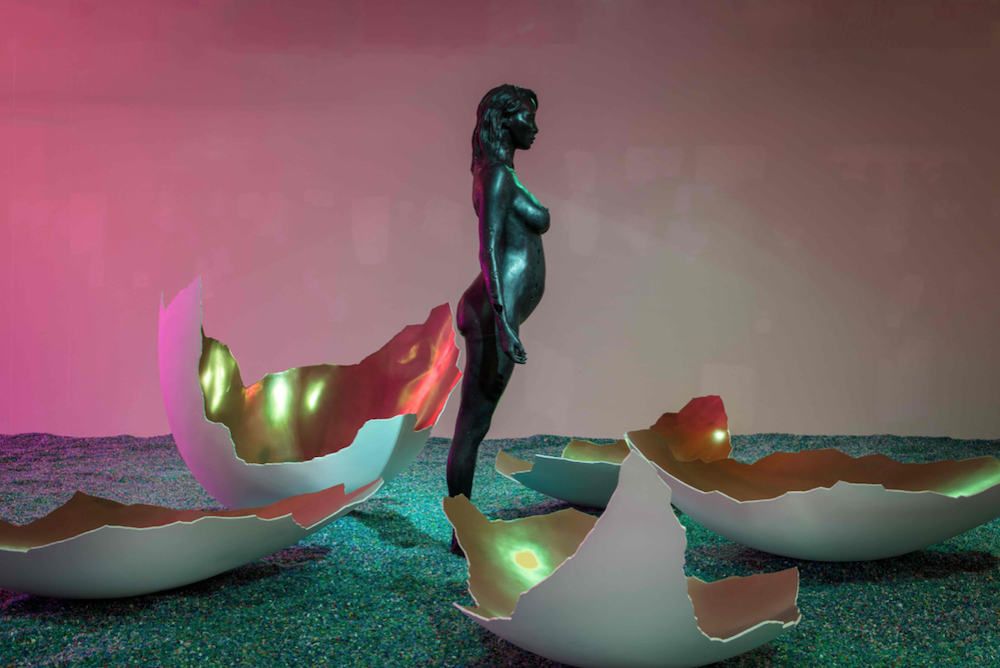 Goddess of all things, recycled plastic, 2019. Courtesy the artist.
Upon entering the viewer is lured in by a continuous ethereal soundscape created in collaboration with the composer Toni Castells – underwater recordings of whale sounds and artificially altered human heart beats reverberate around the gallery, while three neon flower chandeliers illuminate the life-size sculptures and sparkling colours that bulge underfoot. Immediately to the left stoically stands the Goddess of All Things a jet black pregnant female figure surrounded by fragments of a cosmic egg recalling the end of one era and the beginning of another.
​
Three more figural sculptures present themselves, in the centre Oro and Le Marseillais sit and hang respectively. The former is a cast of the artists’ daughter perched upon a precariously placed island structure that alludes to the fate of future generations; while the latter sees a self-portrait of the artist suspended upside down above mirrors which act as a reminder of his duties to the world, an allegory of the individual need to reinvent humankinds relation to the ecosystem. In the corner are The Lovers of Pompeii, locked in erotic embrace this frozen couple commit a last act of hope as they are surrounded by exploding fragments of a polyhedron symbolising a new big bang. 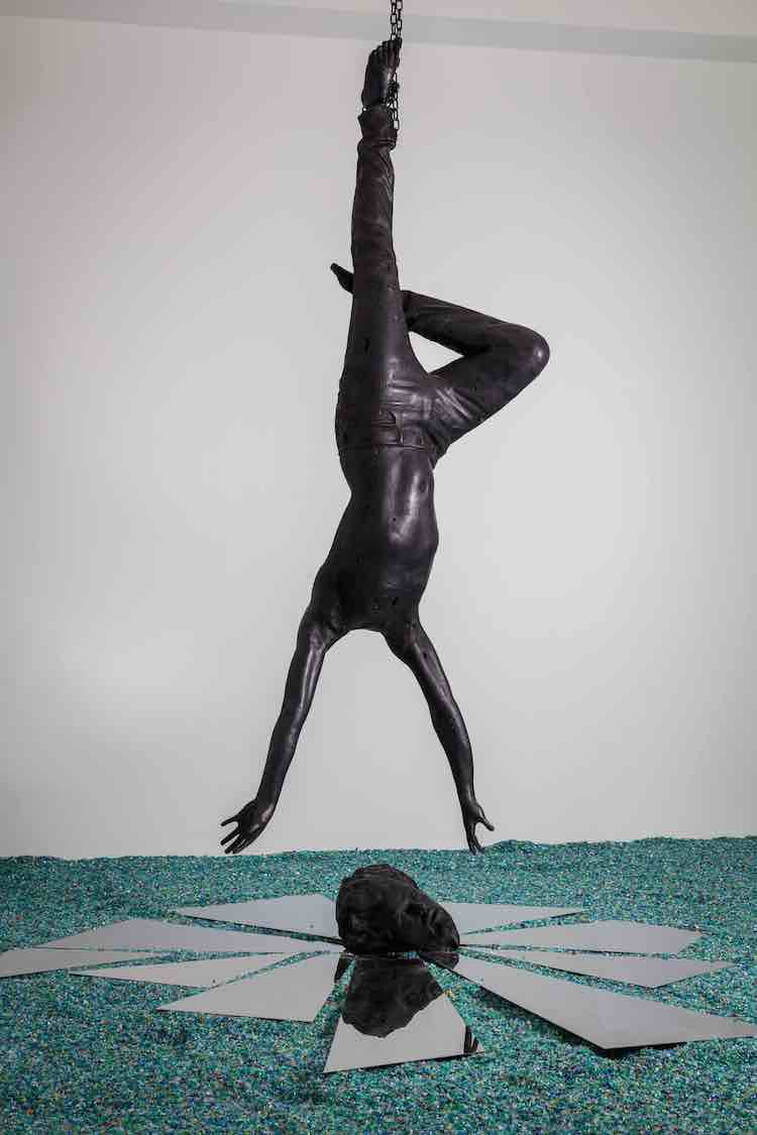 Le Marseillais, recycled plastic, stainless steel polished mirror, 2019. Courtesy the artist
Both within the main space and in an adjoining room Artificialis includes two new works with a more explicit commentary on the environment, particularly the consequences of human impact from pollution to de-forestation. A large metal cage filled with plants and neon signs entitled O2 acts as a preserved garden of Eden that is paradoxically sought yet destroyed by the actions of humankind; the cage and signs within which take the form of chemical compounds, specifically highlight the threat of pollution so prevalent in the world’s mega-cities. While the installation Primitive created from dead Elm wood presents a forest distorted by patterns of des-forestation that are inspired by aerial footage of the Amazon rainforest. Displayed within a separate room, that takes the form of a sheltered sanctuary in which to contemplate memories of this lost world, the viewer is confronted by a looped sound text in which Commarque emphasises notions of consumption and acceleration. 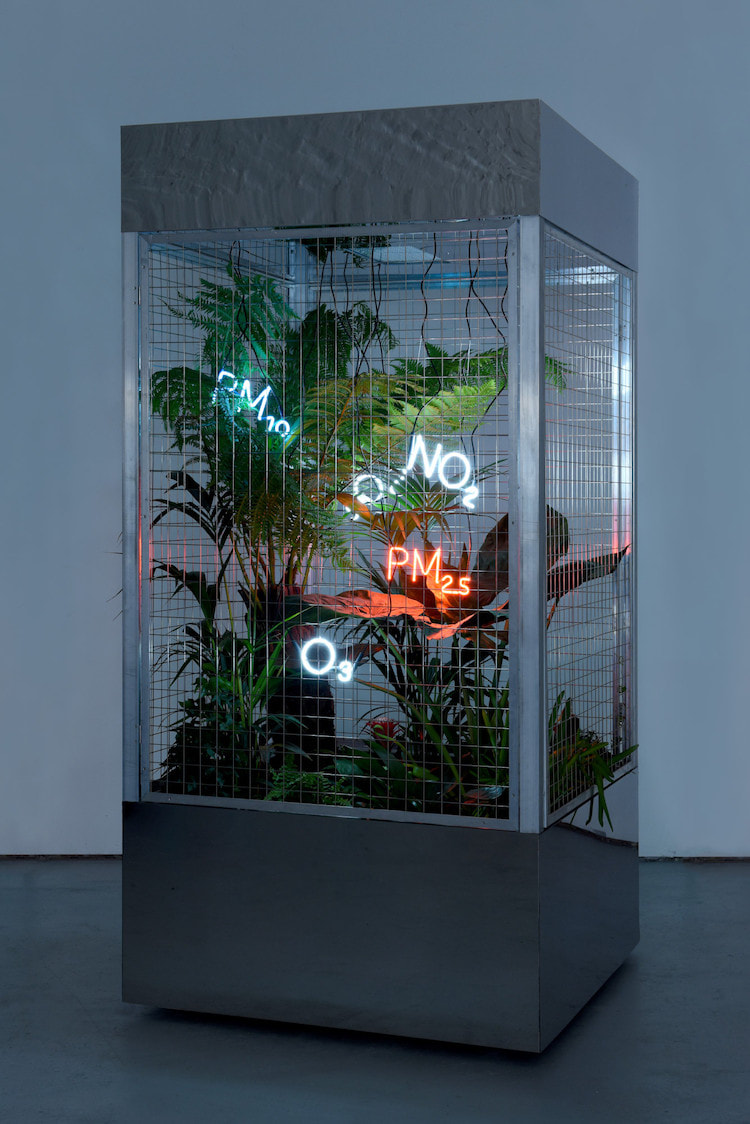 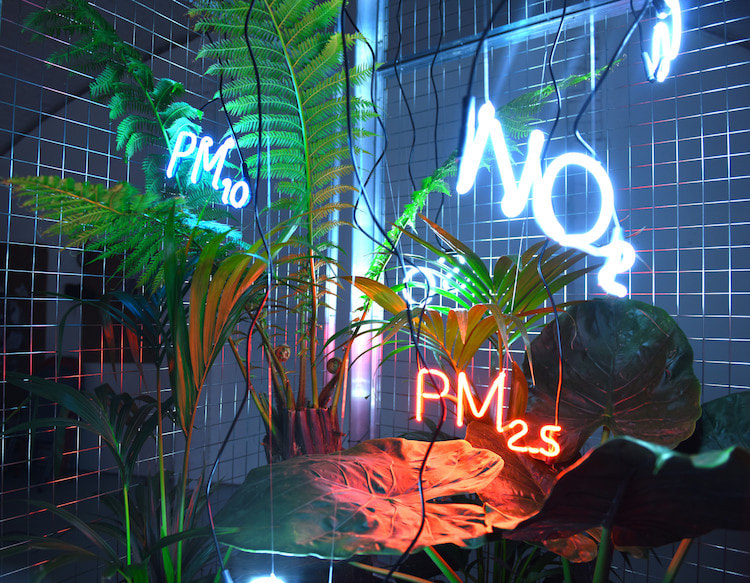 O2 (detail), metal cage, neon, tropical plants, 2019. Courtesy the artist
The exhibition also draws attention to the use of synthetic processes in the making of art and the notions of how art itself may evolve to accommodate and reflect increasingly artificial humanity. In sync with the exhibitions theme of transition between Homo Sapiens and Homo Artificialis, Commarque’s process of production integrates artificial intelligence as well as traditional forms of artmaking. For the figural sculptures he begins by scanning a live model using 100 angled cameras, before re-designing the scan with ZBrush which is then transferred to a milling programme controlled by a coding system and built with a programmed robot, before a lengthy stage of traditional handcrafting. While from afar the sculptures appear to be made of black marble in reality Commarque primarily uses recycled plastic which would normally contaminate the environment. In this way the artist also questions traditional and emerging forms of artistic expression, the artistic process, as well as the social and critical reactions to the role of artists and works of art.
​
Commarque’s installation transports humans to the future and makes us think about what we might become and how we are going to affect our environment. Even after visiting the exhibition, the tiny plastic flakes ended up on my floor at home and I couldn’t help but think about how humans are polluting our planet as we speak; it is too late to turn back as this damage has already been done, however we can work towards a better future and at the very least Artificialis encourages us to do so. 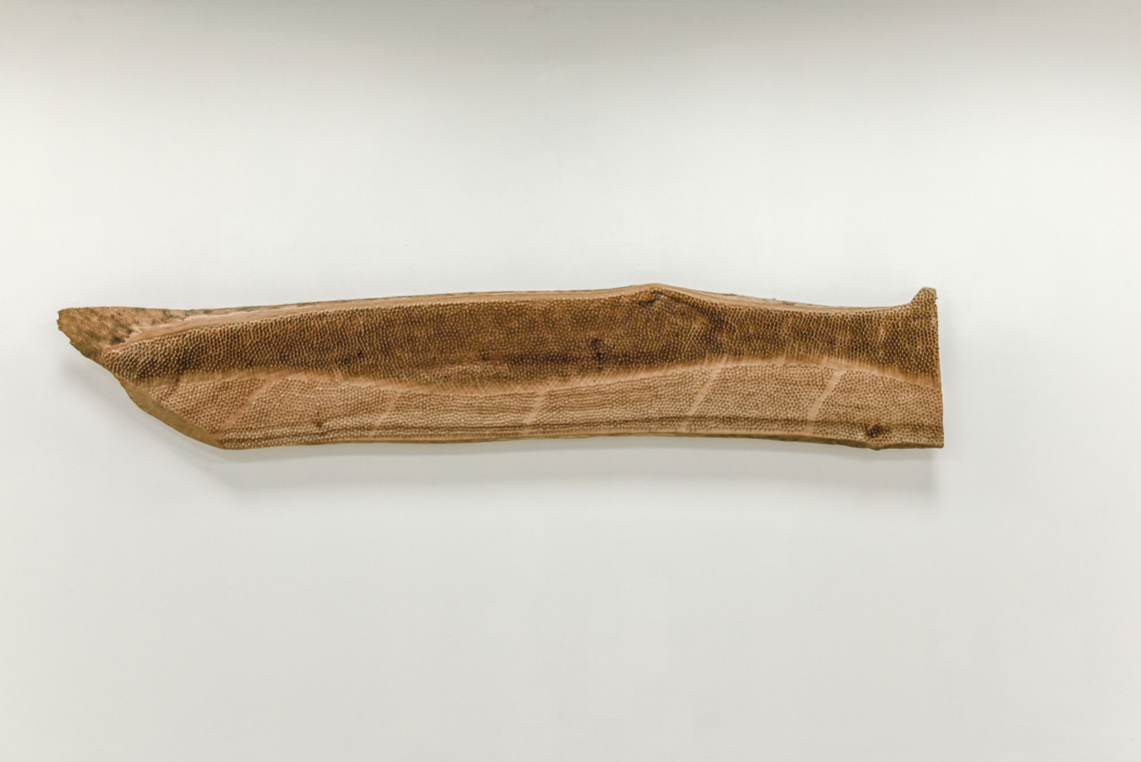 Primitive, 2019, wood. Courtesy the artist
Artificialis
is on view at Saatchi Gallery in London until 1 March 2020.
​For further details see HERE

Cyril de Commarque (b.1970) lives and works in London. Commarque has had numerous exhibitions including a solo exhibition at MACRO and an acclaimed sound performance in London for which he built a 25-meter-long polished/mirrored boat sculpture entitled Fluxland along the river Thames. His works have been featured in prominent group shows at institutions including the Grand Palais, The Foundation Louis Vuitton, the Bibliothèque Nationale de France and the Fondazione Giorgio Cini and Venice Biennale alongside the work of artists including Marcel Duchamp, Joseph Beuys, Gerhard Richter and Ai Weiwei.